Halogen, HID xenon, and LED bulbs are the most common headlight assembly replacement to light your Toyota Tundra. Each generation of Toyota Tundra headlights will have a different bulb size.

Customers should replace Toyota Tundra bulbs every few years because their efficacy degrades by several per cent over time. In the Toyota Tundra, there are various types of bulbs.

This article will tell you about the different generations of models introduced by the company over a certain period of time.

The Toyota Tundra was introduced at the turn of the century as a successor to the T100. The Tundra debuted in 2000 and shared much of its underpinnings with Toyota’s full-size, three-row Sequoia SUV. It was available in two cab configurations and two-bed lengths.

The Tundra received newly available options in 2002, like a limited-slip differential and a TRD Off-Road Package, and a unique V-8 StepSide Access Cab model in 2003.

These models were equipped with a five-speed automatic transmission, with a new six-speed manual transmission available as an option.

The Tundra can tow up to 7,100 pounds when properly equipped. 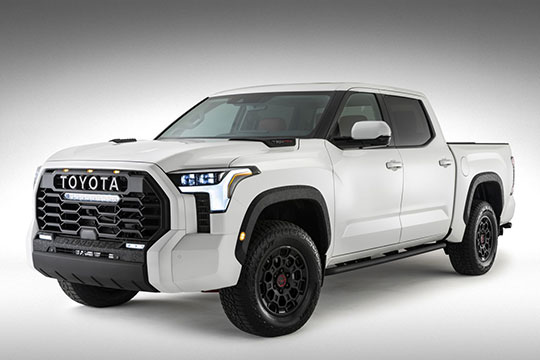 After a six-year run, the half-ton Toyota Tundra had a complete redesign in 2007, with a sleek new exterior and user-friendly cabin, higher towing capability and storage, with more safety features.

Three cabs, three beds, and three engines were available, including a 381-horsepower, 5.7-liter V-8 with 401 pounds-feet of torque.

In 2010, the Tundra received minor updates, including replacing the outdated 4.7-litre V-8 with a new 4.6-litre V-8 combined with a six-speed automated transmission.

After that, the Toyota Tundra remained essentially unchanged until 2014, when it underwent minor interior and exterior modifications.

The Tundra has two V-8 engines, two- or four-wheel drive, three bed lengths, and two cab configurations. For long-hauliers, a 38-gallon gas tank is available as an option.