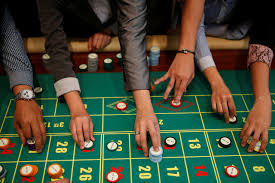 Those people who are over 21 will now be able to go to casinos and slot halls in Ukraine, and the state will receive impressive profits in the form of taxes. The Verkhovna Rada legalized the gambling business on July 14, and President Volodymyr Zelenskyy signed the law adopted by the people’s deputies on August 11.

Recall that the main argument for the return of gambling to Ukraine is attracting billions of hryvnias to the state budget, because a license is not cheap. For gambling addicts, they provided a fuse – a register. People on the register will not be allowed into gambling establishments.

The law introduces a list of permitted types of activities and establishes criminal liability for work without a license:

In addition, the document implies the following innovations:

“I definitely perceive the adoption of this law as a very positive phenomenon. The bill is balanced, it takes into account a lot of modern things. Time will show how it will work,” says Oleksiy Yevchenko, vice president of the Ukrainian Association of the Game Industry.

Changes Are Not Over

The law became scandalous after December 19, 2019 when there was not enough votes for its adoption, and the document was sent for a second first reading. After that, the president declared a real war on the “protectors” of the shadow gambling business, who were accused of disrupting the bill. As a result, literally in one day, all the “instant lotteries”, under the guise of which the slot machines were operating, were closed. But the fight against it continued.

After the adoption of the bill in the Rada, the deputies registered 3 resolutions on its abolition at once. However, the parliament rejected them at a meeting on July 21.

The law allows casinos to be placed exclusively in hotels, while there should be no schools and similar establishments within a radius of 500 m. At the same time, restrictions are also prescribed for hotels: they must be 5-stars and have a certain number of rooms. For units in the capital – at least 150 and at least 100 rooms outside Kyiv. The cost of such a license in Kyiv is $ 2 million, and outside the capital – $ 1 million per year.

This practice is actively working in many countries. For example, the complexes of Storm International, Darren Keane, the managing director noted, are often located outside the city. Such places are visited not only by residents of the country, but also by foreign guests. These are popular destinations for gambling tours for several days.

The main reason why the authorities are so focused on the legalization of the gambling business is filling a very leaky budget. Experts have calculated that the law will allow attracting UAH 3-4 billion a year to the state budget. However, Aleksey Yevchenko believes that there will be more receipts.

“The Ministry of Finance gave calculations for 4.5 billion, in fact it will be from 6 to 10 billion UAH annually. This includes direct payments to the state for licenses for casinos, slot machine halls, various online stories, plus money for each conventional unit – for a gaming a table, a vending machine, etc. But we must not forget about the investments that will enter the country through the construction of new hotels, new infrastructure,” Yevchenko notes.

Experts predict the return of “gambling” tourists from abroad, primarily from Armenia, Uzbekistan, Kazakhstan, Georgia, Israel, European countries, and from Russia as well, because they come from it even now. In any case, hotels and future casinos are actively negotiating for cooperation.

Also, citizens who work in the gambling business abroad will return to Ukraine. For example, at units of Shangri La, Darren Keane said, there are many Ukrainian citizens who are happy to return home when suitable casino jobs are available.

“I have a company that has been engaged in hotel consulting for 14 years, and now we have received a lot of requests from gambling operators, including helping them choose a hotel where they could place a slot machine room or a casino. The hotels are ready to “marry” a gamer because they fear that this will break their target audience, “says Evchenko.

There are not so many officially categorized 5-star hotels in Ukraine, and there are only a few separate rooms in them. Therefore, Kiev hotels, experts say, are already converting their conference rooms and call rooms into casinos, since the cost of 1 sq. m lease covers any costs for repairs and re-profiling.